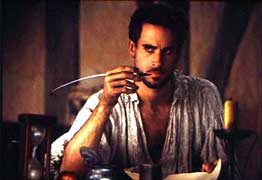 Help us choose which films to see in the future.We will consider films from these lists as well as other suggestions.

Saturday July 20th at 8 we will see